April is National Poetry month, and I’m writing a lot! I’ll post new poems in progress on my Writing page, so click over and check out the new work. 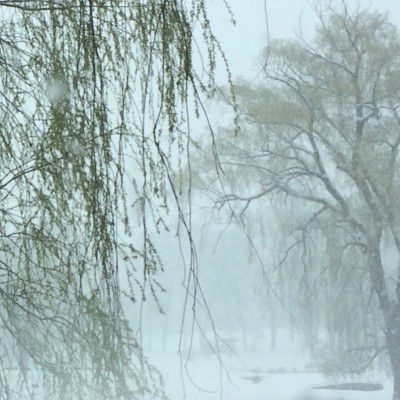 On the country golf course
a softness of greening willows
fades into mist falling from mountain
sky, a reverie, this spring snow gathering—
such an extraordinary Monday. 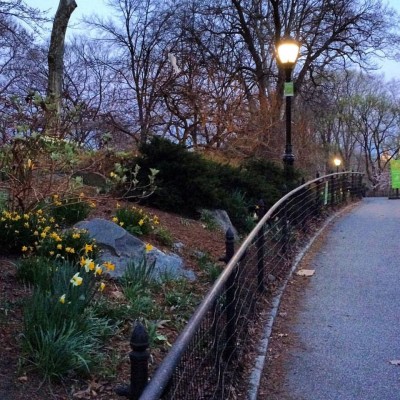 Almost tackled by
a forceful, feigning trash bag–
he kicks at the wind.

In city treetops
wisps of tattered plastic float
like clouds bound to earth.

You will find art in museums and on street corners, in parks and in theaters. The city writes its poetry everyday on sidewalks, dances its dream in sunlight and on stages. Find your way. Find your beauty. It’s here. 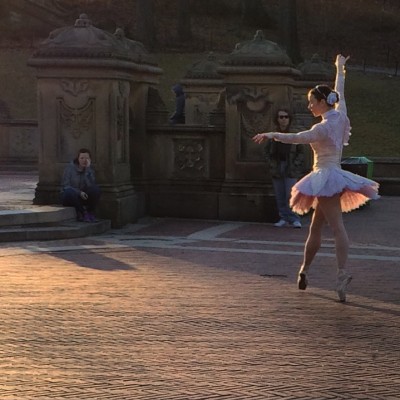 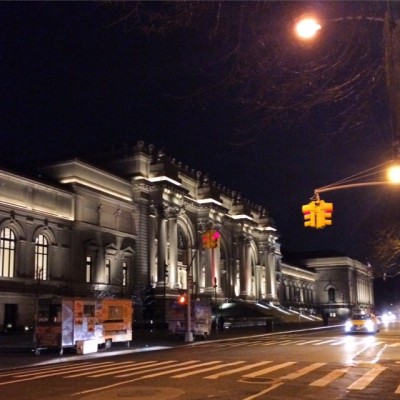 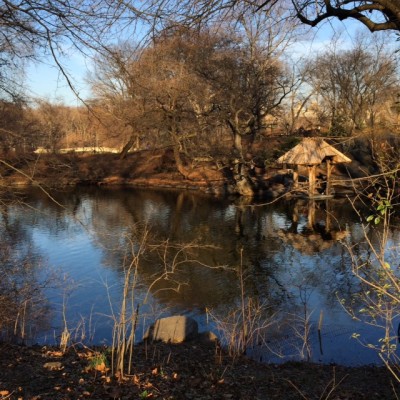 Central Park. This structure part of the ongoing project to renovate all boat landings. 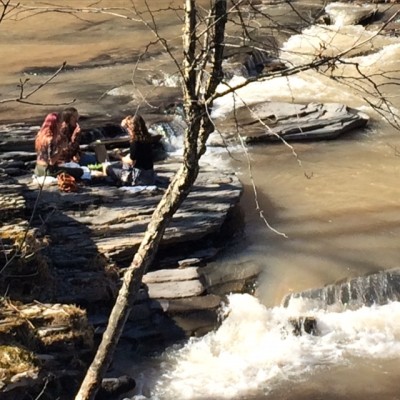 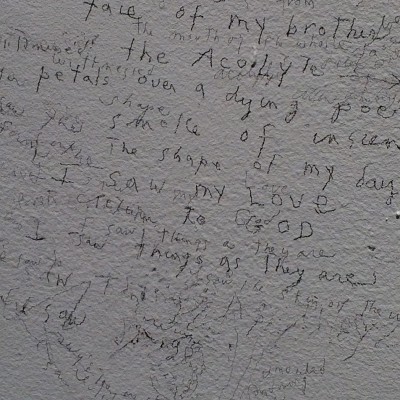 Photo, Patti Smith’s Writing On The Wall, from my Instagram post last night. She told a couple of us that she decided to write on the gallery wall because she likes to deface public property. Then she smiled.

Patti Smith not politics. Last night there were no political statements, no loud campaign buttons, no complaints about potential nominees. (But there was some awesome fashion, which I needed. Thank goodness we’ve still got an edge.)
As usual, for those of us who have attended many events centered around Patti’s work over the years, there was an unspoken poetic understanding and a punk-love sensibility making conversation easy throughout the gallery. Here are a couple of my notes.

Jule walks in the door, and I see Lenny Kaye welcome him like an old friend. Typical Jule. Patti tells me with a smile and a shrug (after I whisper to her about all the work over all the years), “Aww. It’s just my job.”

Think about that. The simplicity of it. Her work ethic is a beast, but the simplicity of purpose, a woman knowing, entertaining no doubt over decades of labor, that she’s just doing her job—that is something to witness. Every time she speaks, she says something seemingly off the cuff, which makes me think about process and discipline. That, I believe, is because she’s a poet.
Sometimes, to find the world a beautiful place, you’ve got to show up and just appreciate other people’s work, struggle, transcendence. And know that the creative spirit transcends all this division right now. To find joy in a day, you’ve got to believe that it does.

After posting, the paragraphs above, I randomly opened M Train to this:
–Yeah, maybe. I’m off balance, not sure what’s wrong.
–You have misplaced joy, he said without hesitation. Without joy, we are as dead.
–How do I find it again?
–Find those who have it and bathe in their perfection.

There had been so much rain. The window screens now woven with spider webs of drops, paths intricate and shining, a splattering made windswept, as if by design. In those first moments of sunrise, the valley pulled at the cuff of winter’s green, a sharp edge more algae than moss. And from the kitchen window, everything near—the blue stone garden path, the painted porch planks, a curving iron table—stood back from the landscape, shining, as if to watch clouds fall from mountain’s grasp, settling firm between the morning and the light.

While many New Yorkers choose to chase warmer climates, the winters in the Catskill region can be thought-provoking for artists with both stark beauty and an incredible softness of light. On hikes this weekend, I found two ice patches, which I photographed on the move with an iPhone and then posted to Instagram. Making the most of winter becomes part of the artistic practice for those of us who brave the cold. 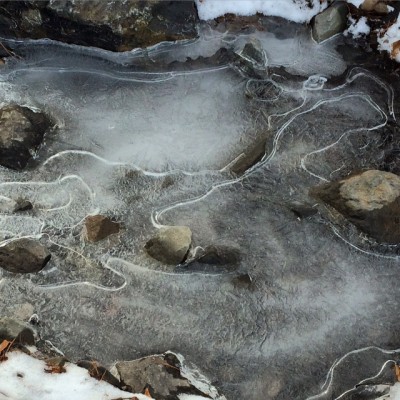 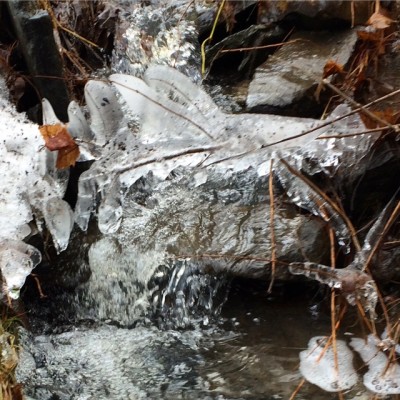 These are posts I made to social media (with links) after the news broke about David Bowie. While they are fragments, I hope they tell a story. I’m based both in NYC and in the Hudson Valley.

Always dapper, he was beautiful with elegant aging, at the same restaurant or on that porch, passing by, elbows almost touching, yes, within that distance, I felt that he was completely electric or did I imagine, while pretending not to notice. But I remember. In the country, just knowing he was nearby created a momentum, a shimmer.

Having lived near where he was changed me. I know that sounds crazy but it did. I felt like that in NYC, too, but, his influence in the country was unexpected. The contrast of his body of work and persona, which in its polish and experimentation was definitively urban, existed, for me, in stark relief to knowing he lived down the road, in the curve of the mountains. It was fascinating.

Yesterday, sitting upstairs at the Golden Notebook in Woodstock, NY, for a wonderful reading, I watched the mountain turn to dusk through the windows and thought about how so many people are pulled to its magic. The diverse readers, all of us there, the artists. I thought of Bowie. One reader read poems of deserts. The mountain sparkled with drying rain.

This is so worth a listen. Thoughts on how the Internet will transform art and audience.

“I don’t think I would be able to cope with the celebrity lifestyle at all. The idea of an entourage is anathema to me…People here are very decent about their interactions with well-knowns. I get the occasional “Yo, Bowie,” but that’s about it. ” ~Bowie

Bowie’s Reflection On Being A New Yorker:
http://www.vulture.com/2016/01/david-bowies-reflection-on-being-a-new-yorker.html

The Concert for New York City

This piece references 9/11 NYC and ends with Woodstock. I always say both places are examples of extremes, sometimes wonderful, sometimes difficult. Around Woodstock and several other Hudson Valley towns, artists, writers and musicians comprise the norm—we’re not considered some unimportant subculture. Fame isn’t more important than doing the work. Maybe that’s what lures, or maybe it really is the mountain.

On the Hudson Valley:
“These performances also reminded music lovers all over the region how lucky we are to live in a place that holds its artists and musicians in such high regard.”

Poughkeepsie Journal: “David Bowie found the America he sought in the Hudson Valley.”

In snowfall she finds
a proper daydream, the past
echoing stillness.

What pulls us to the
mountain sky, prayer flags on night
stars—tree tops’ soft spires.